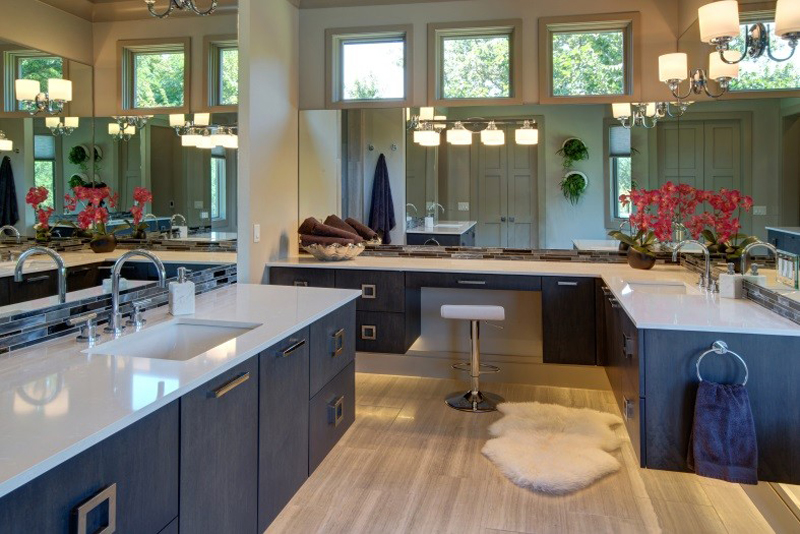 Are you wondering about the hot bathroom trends for 2016? Whether you are looking for ideas to give to your custom home builder or thinking about a remodeling project for your current home, keep these ideas in mind. Contemporary and transitional style bathrooms are the reigning favorites among the affluent and trendy set. Traditional bathrooms, while not as popular overall, still have their fair share of interest, too. There are a number of finishes that are currently popular for use in a custom built bathroom, including faucets, hardware, fixtures and elements. For clients who used our custom home building in Oklahoma City and surrounding region, they favored brushed nickel, polished chrome, satin nickel, and rose gold. 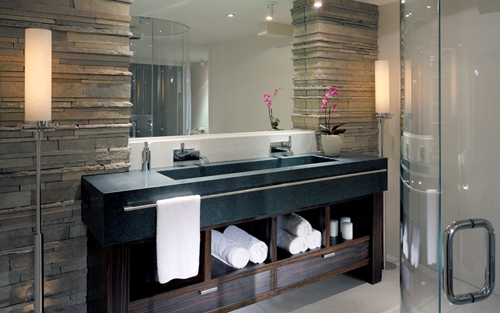 Don’t let the name fool you; a “trough sink” is more elegant than it sounds. Some people would refer to this as a “double sink.” It’s basically an extra long sink that’s big enough to serve both you and a significant other if you should both happen to be trying to get ready to go somewhere at the same time. A trough sink is configured differently than the double sinks that were so popular in the 1980s. Back then, it was trendy in some areas to have two separate sinks incorporated into the same vanity. The newer trough sinks are handy for those who might wish to hand wash large items like a man’s big and tall wool sweater, a wool blanket or a king sized sheet. However, the latest trough sinks are styled to appeal to contemporary consumers, and they offer outstanding style and functionality. 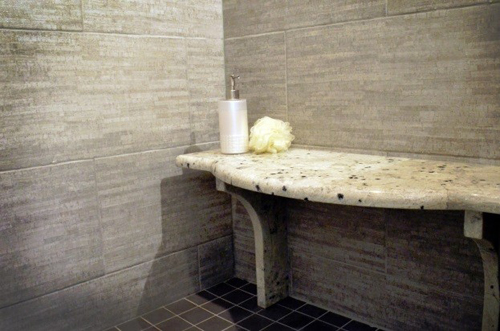 In the past, showers were designed for use by people in the upright standing position. Lately we’ve seen an innovative new trend that is likely to pick up steam in 2016: the shower seat.

We’re convinced that whoever thought of this idea is a genius. Perhaps you’ll agree if you’re one of those people who ever has to shower when half asleep. Maybe you wake up early to work out in the morning, or maybe you come home falling-asleep-tired after doing a job that demands a follow-up shower. Wouldn’t it be lovely to have a seat handy to rest in while you suds up and shampoo?

Grab bars are another great option for seniors, and they are also trendy at the moment. You can put grab bars just about anywhere you might need them, the shower is definitely one of the most popular places to install them these days.

Squares, almost-squares and angular shaped designs are hot these days. We’re seeing blocky looks and square shapes popping up everywhere, from web pages to cosmetics palettes to automobile designs. Crafters are enjoying a resurgence of interest in granny squares. Squares are a hot commodity in home décor as well, and they’re particularly well-suited for use in bathroom décor; they are versatile shapes that work well in modern, contemporary and transitional bathrooms.

Geometric inspired square faucets and fixtures are finding their way into master baths and powder rooms across America. Angular designs are making appearances in a variety of bath elements, including bathtubs, showerheads and soap dishes. 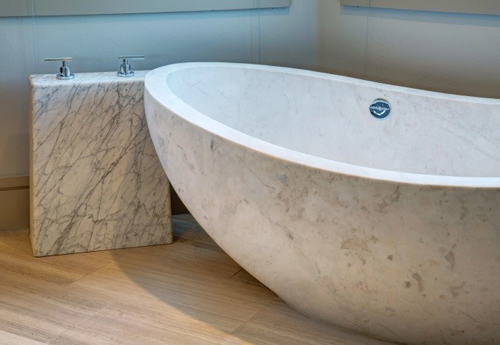 Built-in bathtubs are declining in popularity. Some are abandoning bathtubs all together in favor of walk-in showers. For those who don’t want to give up their bathtubs, freestanding soaking tubs are the preferred bathtub of choice among 2016’s trendsetters.

When you’re initially designing your bathroom layout, freestanding tubs offer a lot of flexibility in their placement. Interestingly, some people are choosing to put their freestanding tubs inside their shower areas.

Lately we’ve been seeing some bathroom vanities that feature open shelving. It’s chic and trendy to roll up soft, colorful, sumptuous bath towels and display them on open shelves in the bathroom. However, there are plenty of other things you can put on those open shelves if you prefer.

Steam showers are of current interest for installation in 2016 bathrooms.

Bathroom floors are notoriously cold, but they don’t have to be. The solution: electric heated floors. These are currently being installed in rooms besides just the bathroom, but they are particularly popular in the bathroom due to their ability to help dry out moisture and humidity that results from bathing and showering.

It’s trendy to put lights in the shower instead of just relying on the bathroom’s main light to illuminate the shower area. 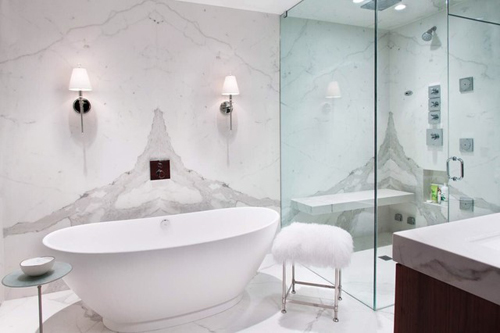 White is one of the top bathroom colors for 2016. White bathroom fixtures are in strong demand, as are white bathroom tiles and bath accessories as well. White is an outstanding color to use in your bathroom no matter what your style, whether it’s modern, contemporary, traditional or transitional. 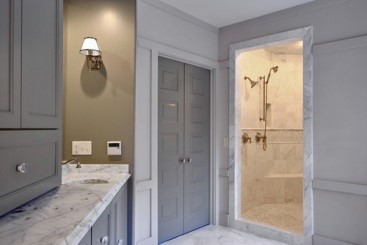 Gray has been a trendy color for the past few years, and it’s still going strong for 2016. Gray and white is a popular color combination. If plain gray or a combination of gray and white doesn’t excite you much, remember that gray can take on any other color as an undertone. As a result, if you’re careful in contemplating the undertones of the specific paint colors you’ll be using in your color scheme, you can combine gray with just about any other color you might want to use in your bathroom. 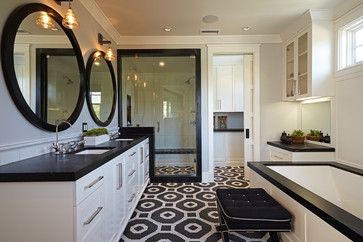 Black and white makes a strong statement for 2016 bathrooms. In particular, trendsetters are doing interesting things with black and white bathroom tile. Black, gray and white is another interesting color combination we’ve been seeing a lot of.

For more information about custom home building in Oklahoma or to get advice on your next custom bathroom and custom home project, check out our home builder blog!

We Can Answer Your Questions

We will respond within 24 hours.

© 2018 All Rights Reserved. Managed by Webrevelation